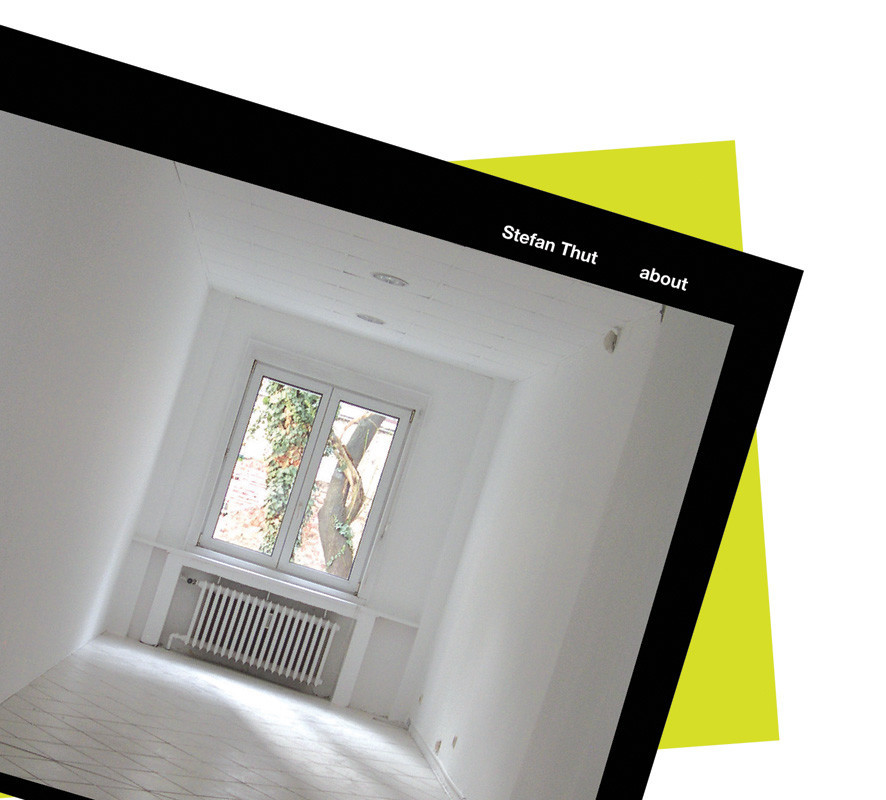 Stefan Thut composed 'about' in 2017 for a sextet as a part of the first concert series of the art and music project , commissioned by Ryoko Akama, a UK-based sound artist/composer/performer and a co-curator of . Akama gathered four fellow musicians who were empathetic with aesthetics to perform and record the piece. The ensemble consisted of Akama (electronics), Stephen Chase (guitar), Eleanor Cully (piano), Patrick Farmer (metal percussion), lo (tingsha), and (cello), who have diverse backgrounds in music, poetry literature, and comprised a multilingual group.

integrated both musical elements and non-musical elements in his piece 'about'. His score instructs three performers to make percussive, ringing, and electronic sounds while three other performers play short high register pitches on their musical instruments according to written scores, particularly paying attention to the decay of sound in the subsequent silence. It also instructs parallel activities in between playing the sounds; walking around the space, and uttering monosyllabic words quietly in their own languages. (The title 'about' derived from a sentence 'walking about'.)

By going back and forth between these two activities - one with playing the sounds as a group, and the other with individual activities of their own - standing up, making a few steps, and saying a word, the ensemble created a unique openness in the music while each keeping their own contemplative individual experience as a component. Through this piece, also demonstrated the idea that "something vanishing creates a state of pure attentiveness,” letting the performers and the listeners experience how the short sounds like , plucked, ringing or bowed sounds attribute a meaning to the silences before and after. These silences are soon getting replaced by something else - by the sounds from before, by the sounds in expectation, or thoughts.

Swiss composer and cellist Stefan is interested in processes and scores that invite both the performers and the listeners to delve into a world. He studied music at the Lucerne Conservatory and at Boston University School of Music. After experiences with new and experimental music, improvisation and noise, started writing scores. Through his he provides relatively determined systems in order to develop a praxis. In addition to instruments used in traditional ways, he also uses everyday materials as components in his work. As an he has performed a lot of music for solo cello written by his fellow and affiliated composers of the Edition Wandelweiser. Stations of his recent activities included Bilbao, Düsseldorf, London, Reykjavik, Saint Petersburg, Tokyo and Zurich among other towns. He has released albums as a composer, performer cellist from Edition Wandelweiser and other international labels.

Ryoko Akama is a UK-based composer and performer whose work, ranging from text compositions to sound installations, pursues minimal, reductive, cumulative, and contemplative experiences. Her work aims to offer quiet temporal/spatial and is connected to literature, fine art and mixed media (technology). She employs small and fragile objects such as paper balloons and glass bottles in order to create tiny aural and visual occurrences that embody ‘almost nothing’ aesthetics. She composes text scores and performs a diversity of alternative scores in collaboration with international artists. She directs the melange edition label and is co-editor of the independent publisher .

ame ( / experimental), based in Huddersfield, West Yorkshire, is an international creative hub that supports experimental music and art, commissioning works from both emerging and established composers and sound artists. It provides concerts, installations, educational projects artists-in-residence programs, working together with local venues and organizations.

mixed and by Simon Reynell and Stefan Thut

design and photography by Yuko Zama

thanks to: University of Huddersfield and