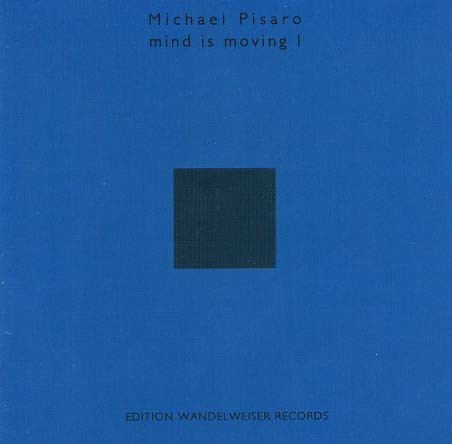 In our daily life filled with many excessive noises, it is often difficult to find pure states of silence and calmness. Various mixed sounds and images appear one after another in a stagnant air, passing by swiftly like they are competing with time. Is it only possible now to experience a precious, seemingly eternal time and an unclouded, seemingly infinite space in a fantasy?

'mind is moving I' is an early piece for solo guitar by Michael Pisaro, composed and recorded in 1995 and released by Edition Wandelweiser in 2001. The serenity of silence, which has been vanishing from our daily lives, is thoughtfully captured and described in this beautiful piece. Right after the moment the music starts, it feels like the air surrounding me has completely changed - like there is a new 'space' simply born from the sparse guitar sounds, whistles and silences - which seems to instantly clear away all the worldly noises and worldly thoughts in the room. The soft, clear air of the space created by the music seems to contain the tenderness of a pure silence, which I had experienced somewhere before but had forgotten for a long time.

The moderate volume of the whole piece has a wonderful effect to create this spatial atmosphere in the music. Every time a set of guitar sounds is played with one note or a few together at a time, the subtle vibrancy of the harmonics born from the strings (that were tuned entirely based on harmonics) let off a translucent chord into the mysterious silence one by one, sending in crystal-clear air into the music - just like a tree breathing out oxygen gently in a forest. As time goes by slowly, the guitar sounds, which are carefully placed as if tracing the outline of the invisible landscape from different directions, seem to gradually broaden and deepen the meditative space of the music. A soft whistle appears once in a while, blowing through the imaginary space like a colorless wind. The tranquility attained here is flawless. The guitar sounds come in and out with their resonances restrained to moderate lengths, so they would not leave any cloudy residue in the clear air. In the silences between sounds, similar subtle vibrations seem to remain in the air (or in my memory) after the sounds disappear as if there were still some sounds.

It is surprising how unintentional and natural the whole music sounds, even though all of the details are precisely configured in the score as in many others of Pisaro's pieces - from the pitches and strengths of each guitar sound, how to make string noises, how to create harmonics, how to make whistles, how long each sound should last, how to stop each sound. Despite all these regulations, the resulting music feels as if it had become one with nature melded into the flow of time, and there is no stubborn sound that tries to remain in the air against this natural melding. The preconceived idea that compositions may kill the rhythms and breaths of nature by forcing them into artificial forms is completely defied by Pisaro's works - which contain a natural (and almost mysterious) power similar to a Zen monk's silence born in the spiritual state of nothingness. This is a power to change the characteristic of the space - and even the way that environmental sounds are heard - silently but dramatically.

While John Cage presented silence in 4'33" in an intense, provocative way like breaking an invisible hole in the air (and in time), Michael Pisaro presents silence in his 'mind is moving I' to connect music and nature as one entity - without disturbing the flows of time and air. The silence in Pisaro's music contains a naturalness which is close to Zen spirited silence, a concept which many Western musicians have been fascinated with and have tried to instill in their music, but rarely seem to be able to reach this goal so successfully as Pisaro does here. Just like the forest contains trees, Pisaro's music contains Zen (or meditative) silences naturally. This must be the reason why it feels as if the performer's space and the listener's space were instantly connected as one place in 'mind is moving I' - like both were sharing the same infinite space and eternal time.