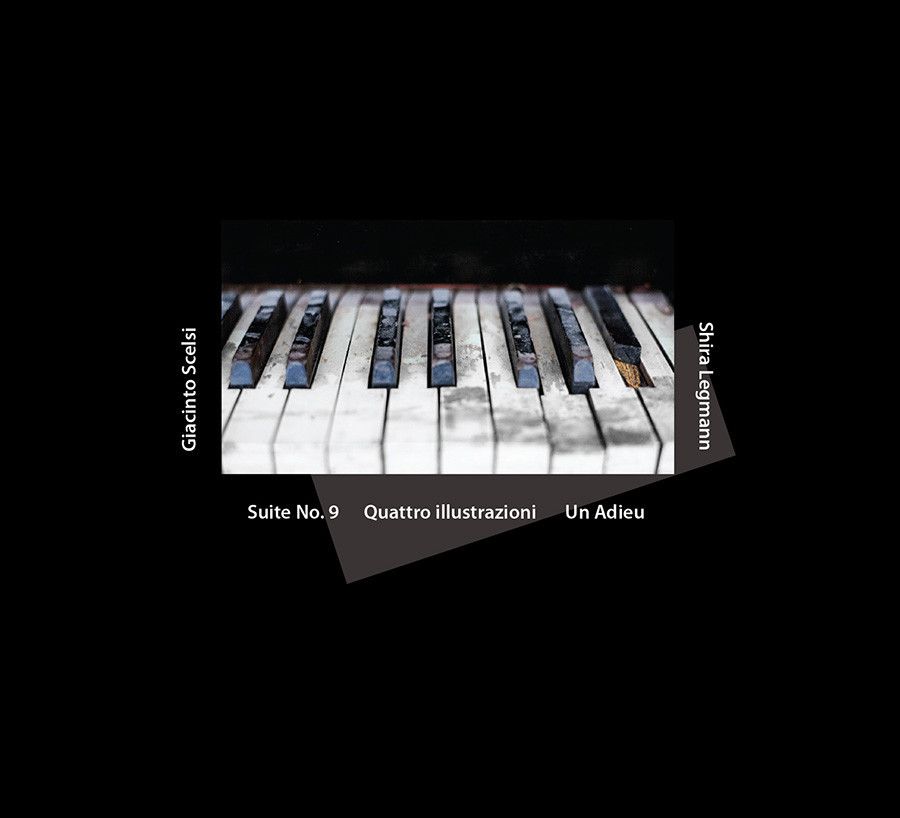 Shira Legmann is an Israeli concert pianist, with a wide repertoire from Baroque to contemporary and experimental music. This album contains three piano works by Italian composer Giacinto Scelsi's: 'Suite No.9 "Ttai"' (1953), 'Quattro illustrazioni' (1953), and 'Un Adieu' (1978/1988). 'Suite No.9' and 'Quattro illustrazioni' were recorded live at two different concerts in 2014, while 'Un Adieu' was recently recorded in a studio in June 2020. This is Legmann's second CD on Elsewhere Music, following the 2019 album 'Barricades' in which she was the pianist for Michael Pisaro's composition for piano/electronics.

"Scelsi's music is something that 'grows' on us both as listeners and musicians. When I first discovered his music about ten years ago, I just dove into studying it, not knowing too much about it, and the connection grew slowly while getting into more and more nuances in the playing. For a few years, I've been fascinated by these three pieces, and have performed them in Israel. It was not an immediate 'crush' but something that has gradually matured in me."

“Scelsi was said to be a modest artist. He believed that as a composer, he is merely a mediator. For a substantial period, he composed his piano pieces by improvising: he conceptualized them and then improvised while recording. Later, with the help of friends and assistants, he notated from the recordings and that was his written composition. Since these compositions derive directly from improvisations, I felt the best representation of them would be as recordings of live performances, where there is also an element of risk, surprise, and spirit." - Shira Legmann

"A whole chapter of recent musical history must be rewritten: the second half of this century is now unthinkable without Scelsi... He has inaugurated a completely new way of making music, hitherto unknown in the West." - Harry Halbreich

Legmann's clean, supple yet solid piano sounds, which create a perfect balance of coolness and warmth, build a narrative flow with a stunning dynamic range, bringing these rarely performed piano works of Scelsi's back to life into the twenty-first century as timeless masterpieces.

The cover photograph was contributed by David Sylvian. The desolate image of abandoned old piano keys echoes the mysterious Zen silence and discreet yet profound beauty of Scelsi's piano works.

Shira Legmann (born 1981 in Aachen, Germany) is a concert pianist with a wide repertoire – from Baroque to contemporary music – and an interdisciplinary artist who creates new compositions and soundtracks based on graphic novels, animation and video art. In recent years, she has performed piano recitals that span Bach's Goldberg Variations, Olivier Messiaen's Vingt Regards, György Ligeti's keyboard music, Morton Feldman’s late repertoire and Giacinto Scelsi's piano music, among others.

Legmann performs frequently as a soloist in Israel, Europe and the U.S. Some of the concert halls she has recently performed in include Musée de la Chasse et de la Nature and La Foundation Suisse in Paris, Jordan Hall in Boston, An Evening with Steinway series, the Tel Aviv and Haifa Museum of Arts and more.

Alongside her activity as a soloist, Legmann served for the last seven years as co-artistic director and active member of Musica Nova Ensemble, a unique collective comprised of musicians and sound artists dedicated to contemporary and experimental music. She was also invited to perform as a guest pianist with the Israel Contemporary Players ensemble, conducted by Ilan Volkov and Zsolt Nagy and with the Israeli Chamber Orchestra, with conductor Ariel Zuckermann and others.

In addition to concert performances, Legmann has presented original compositions at the Tectonics Music Festival in Tel Aviv, the fifth Biennale for Drawing in Jerusalem, and the Tel Aviv Museum of Art.

Legmann holds an Artist Diploma from the New England Conservatory in Boston, Mass., and a Masters from the Buchmann-Mehta School of Music at the Tel Aviv University, where she graduated with honors. Shira studied under the guidance of pianists Alexander Korsantia, Natasha Tadson and Michael Bugoslavsky.

In 2019, Legmann has released her first two albums: Barricades, together with American composer Michael Pisaro, and J.S. Bach: Keyboard Partitas Nos. 1, 3, 4 (self-released). In August 2020, Legmann composed and recorded a 12 minute piece 'The Ganges', inspired by a painting-score "The Ganges" by Matvay Shapiro, in which she played accordion and cello, to contribute to the Sound Art Exhibition in Israel and also the worldwide online festival AMPLIFY 2020: quarantine.

1-9.  Suite No.9 "Ttai" (1953)
"a succession of episodes which alternatively express time - or more precisely, time in motion and man as symbolized by cathedrals or monasteries, with the sound of the sacred 'Om'" (Giacinto Scelsi)

10-13. Quattro illustrazioni (1953)
“four illustrations of the metamorphoses of Vishnu”

special thanks to:  Fondazione Isabella Scelsi