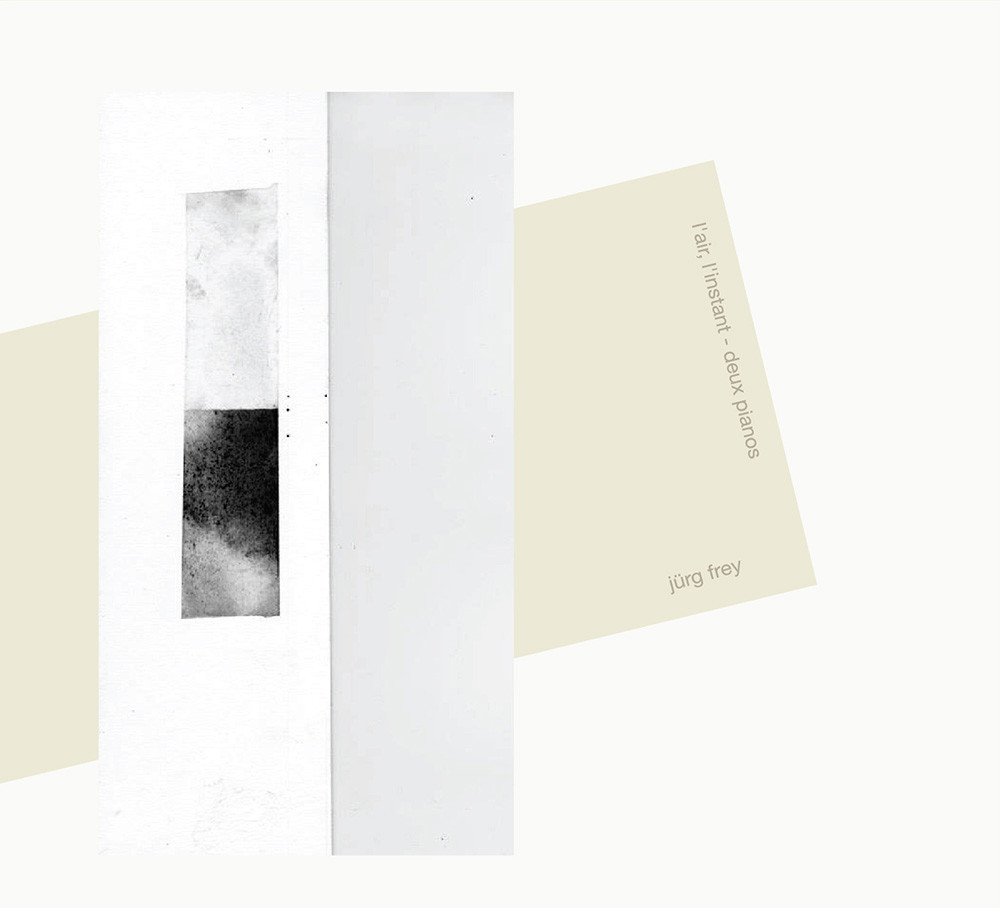 Jürg Frey’s unique compositional approach places him at the cutting edge of contemporary classical music. Since the late 90's, Frey started to work with 'lists' as a basis of his compositions, sometimes words, sometimes chords, from which he developed and organized musical materials. In recent years, Frey's focus on 'lists' has extended more toward the connections of items with each other, forming melodies.

Frey wrote two compositions for two pianos in 2017-2019: ‘Entre les deux l'instant’ (2017/2018) and 'toucher l’air (deux pianos)’ (2019). ‘Entre les deux l'instant’ was world-premiered by Dutch pianists Reinier van Houdt and Dante Boon at Splendor Amsterdam and was later recorded there together with 'toucher l’air' by the same two pianists in the presence of Frey in Amsterdam in 2019.

The first piece on this album, 'toucher l’air (deux pianos)', was composed in close connection to Frey’s previous composition 'Entre les deux l'instant'. This piece consists of seven movements, written for two parts for piano 1 and piano 2, in which two pianists play each part at the same time with subtle similarities but in different tempos. The interaction between the two is only vaguely shown in the score, giving this piece a mixed sense of openness and closeness, separation (or aloneness) and intimacy.

The second piece on this album, 'Entre les deux l’instant', consists of two parts: ‘Melody’ and ‘List of Sounds’. Melody starts with pianist 1 (Van Houdt), then continues with pianist 2 (Boon), going back and forth between two pianists to the end. When one pianist plays Melody, the other plays a note(s) from List of Sounds given in order in the score. The pianist can also add extra notes to the Melody, to double these notes, but slightly later and softer than the sounds of Melody, like adding a slightly ‘off’ shade to it. Two parts are played simultaneously by two pianists but the timings are flexible, up to each pianist to decide, not pre-arranged nor intended to coincide precisely.

Van Houdt and Boon conveyed every fine nuance of Frey’s two piano pieces with their extraordinary sensitivity and masterful skills, organically filling the two pieces with a clean tranquility and airy feeling.

Jürg Frey was born in Aarau in 1953. After finishing his studies at the Conservatoire de Musique de Genève, he began his career as a clarinetist. Until the age of 40, his work as a composer remained mostly private, taking a back seat to his activities as a clarinetist, family man, festival organizer and clarinet teacher for children. In the early 1990’s he became a member of the Wandelweiser composer collective, which has been an experience of inspiration, challenge and long lasting friendships.

Around the same time, he also began his international activities. He developed his own language as a composer and sound artist via the use of wide, quiet sound spaces. His work is marked by a fundamental non-extravagance of sound, a sensibility for the qualities of the material, and a precision of compositional approach. Sometimes his compositions bypass instrumentation and duration altogether, instead touching on aspects of sound art. He has created compositional series, with sounds as well as with language and text.

Reinier van Houdt is a Dutch composer/pianist based in Rotterdam. He started working with tape recorders, radio's, objects and various string-instruments at a young age. He studied piano at the Liszt-Akademie in Budapest & the Royal Conservatory in The Hague. He developed a fascination for matters that escape notation: sound, timing, space, physicality, memory, noise, environment - points beyond composition, interpretation and improvisation.

Dante Boon is a Dutch pianist and composer based in Amsterdam. He became a member of the Wandelweiser composers collective in 2012. He has performed at venues across Europe, East Asia, Canada and the US, and recorded numerous albums, solo and otherwise, for labels such as Another Timbre, A New Wave of Jazz, and Edition Wandelweiser Records. He was a guest lecturer at the 13th Wiener Tage für zeitgenössische Klaviermusik hosted by the University of Music and Performing Arts Vienna. A three-concert musical portrait of Dante Boon was presented in 2012 at Düsseldorf's Klangraum. In 2013, he was a special guest at Michael Pisaro's Dog Star Orchestra festival of experimental music. In the same year, a retrospective of Boon's music was presented at the Los Angeles performance space the wulf. In 2016, Boon was featured as a performer and composer at Quatuor Bozzini's Performer's Kitchen (Montreal).

Dante Boon's CD ‘clarinet (and piano)’, released in 2016, which features clarinetist Jürg Frey, was recommended by Andy Hamilton in The Wire's Top 10 albums of contemporary music. The New Yorker called him a pianist with an "uncommon affinity for music that demands patience, steady hands, and a subtle touch.”