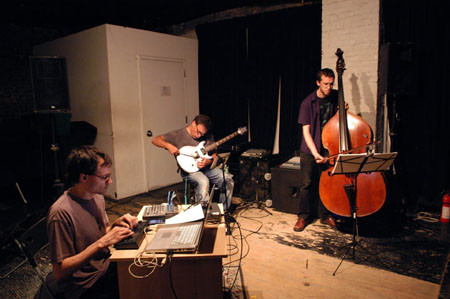 AMPLIFY 2011: stones started with a Wandelweiser night, a trio set of Barry Chabala (guitar), Dominic Lash (contrabass) and Ben Owen (electronics), who played Antoine Beuger's 'approcher s'éloigner s'absenter', which Beuger composed especially for the festival. When the three musicians took the stage and stayed still for a while, it felt as if the air of the room had already been refreshed with a new depth. The garbage-filled cloudy air of the East Village corner felt like it was being purified every time one of the musicians played a sparse sound, while the subsequent silence filled the room with completely new crisp air. Each carefully placed sound made the subsequent silence deeper and thicker, as if they were gradually surrounding the space with an imaginary deep forest. The relation between the musicians' sounds, silences and the outside street noises created a unique sense of perspective, making the outside noises (car passing by, siren of a fire engine, passengers' voices, car stereo music, etc.) closer and farther like surging waves as the performance went on, without interfering with each other at all. It was like a completely new, perfectly balanced three-dimensional space was born with three axes - musicians' sounds, silences and outside noises. At the end of the set, Chabala's guitar sound, Lash's bass sound and Owen's computer sound (which sounded like a mysterious bird in the deep forest) overlapped and melded into each other beautifully, then faded out into the silence.

In the second set, the same three musicians played Michael Pisaro's two short pieces 'hinwandeln' and 'augen zu'. In Pisaro's first piece 'hinwandeln', I immediately realized that the way the outside street noises sounded was very different from that of the first set. The contrast between the musicians' sounds, silences and the outside noises became vague, and they sounded like parts of one entity rather than separated sources. Perhaps the way that each instrument breathed with sounds and silences naturally fit the way the street noises breathed (and also the audience breathed) in the Pisaro's piece, like parts of the same living organism. The sounds of cars passing by, the sirens of fire engines, passengers' voices (which sounded like another axis outside the music, creating the three-dimensional feel of listening experience in the Beuger piece) now rather sounded like a part of the music - like all the elements of sounds and silences existed in one same circle. The sense of unity and the perfect balance of three musicians' sounds gave a profound depth to the music, despite consisting of simple tones and silences. The walls between musicians' sounds, silences, the audience and the outside noises were completely cleared away, and there was a sense of equality, harmony and tranquility (even in the middle of the chaotic East Village corner), while nothing insistied on its aggressive presence. The whole experience of listening to the piece reminded me of the fact that everything belongs to nature, regardless of what they look like.

Pisaro's second piece 'augen zu' was specially composed for the festival. In this piece, Pisaro's processed field recording sounds coming from Ben Owen's computer were very memorable. The sources of the recordings were vague - some sounded like the wind or a wave, some sounded like a distant voice on the radio with static noises. The ambiguity of the sounds created a mysterious atmosphere in the room, with sparse sounds of Chabala's guitar and Lash's bass. Here again, there was a complete, peaceful balance between musicians' sounds, silences and the outside street noises, melding all the elements into one transparent atmosphere. As the performance went on, the musicians' sounds started to grow slowly and gradually, obtaining more strength as music. The transition of the growth was extremely subtle and beautiful, almost unrecognizable for a while. And even in the highest peak of the volume, the music never overwhelmed the balance with the silence and the outside noises - the whole transition of the music was surprisingly natural. After the music had grown like a living organism, it faded out gently into the silence. The equality of everything stayed there, even after the music ended.