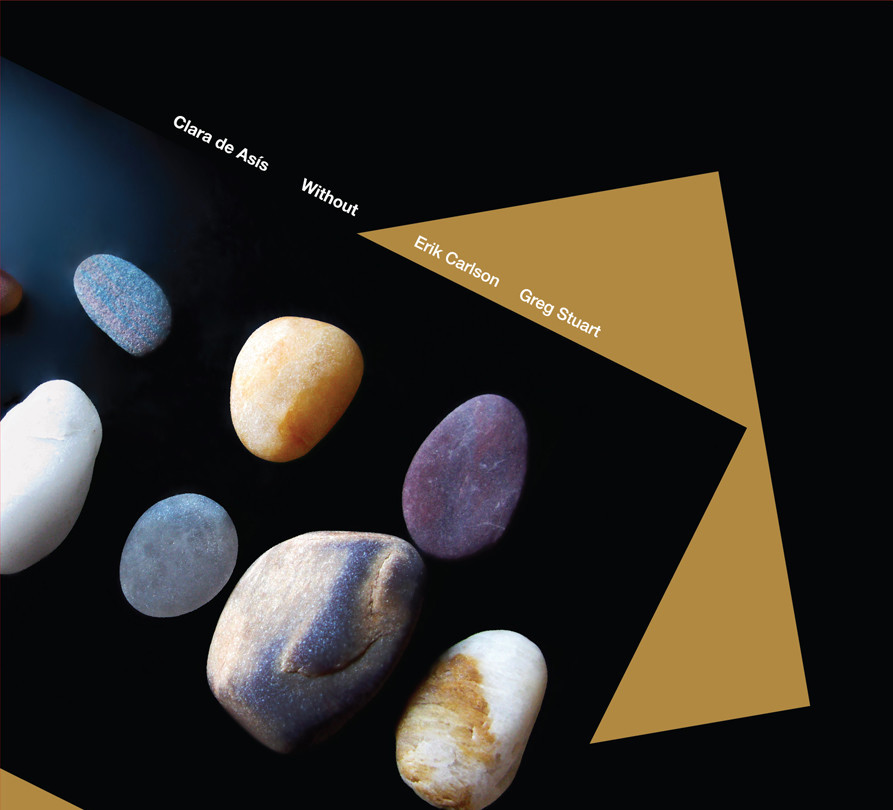 Clara de Asís composed the piece 'Without' for the duo of Erik Carlson (violin) and Greg Stuart (percussion) in 2018. In this 43-minute piece, de Asís gave a precise framework for the position and the duration of each sound section and each silence, as well as a rough outline for the texture and the volume of each sound, the use of tone or noise (or tone-noise), and the materials for the percussion, but a large part of the score was open for the two performers' freedom.

In the realization of this piece, Carlson and Stuart brought out the unique voice of each instrument by applying use of bows on violin and various percussive materials (metal, wood, ceramic, clay, glass, etc.) with their attentive, virtuosic skills and great sensitivities for the sound and silence. Moving along in parallel, Carlson and Stuart showed their individual musical personalities while creating an organic flow, with an exquisite balance between preciseness and openness. The duo’s introspective approach to the sound and silence in this piece evokes the tranquility of a Zen garden while showing a clean contemporary edge, highlighting the simple yet intense beauty of de Asís's minimal composition. David Sylvian’s cover photograph of the small stones, each of which has a unique color and texture, faintly illuminating in the pitch-black background, echoes the mysterious depth and the lucidity of de Asís's piece.

Clara de Asís is a Spanish composer and guitarist based in Marseille, France. She studied cinema at and has developed her fascination with the sound in films into her own sound recording and editing. After moving to France to study electroacoustic composition, she started collaborating with other musicians. De Asís's intuitive, unconventional composition style utilizes a minimal, spatial framework in which performers can create individual sounds with personal instrumentation incorporating active listening, attaining a paradoxical but coherent result, "setting a frame could bring out a lot of unexpected possibilities and revelations that come from the sound itself." Her music has been showcased in many international scenes including Berlin, Paris, Prague and New York. Besides actively releasing collaboration albums in recent years, her 2018 solo album 'Do Nothing" (Another Timbre), on which she played guitar and percussion on a set of her six compositions, was extremely well received.

Erik Carlson is a violinist who has performed as a soloist and with many and orchestral ensembles throughout Europe and the while working as a composer himself. He is a highly active performer of contemporary music and has had works written for him by numerous composers, including Karlheinz Stockhausen, Tom Johnson, Jürg Frey, Christian Wolff Georges Aperghis. He has also made premiere recordings of dozens of works by other composers.

Greg Stuart is a percussionist whose work draws upon a mixture of music from the experimental tradition, Wandelweiser, improvisation, and electronics. He has also been an invaluable percussionist performing a large body of works of Michael Pisaro and other contemporary composers, while also working on his own projects, collaborating with various experimental musicians including Tim Feeney, Sarah Hennies, Ryoko Akama, Eva-Maria Houben, Antoine Beuger, Frey, and Kunsu Shim.

Carlson and Stuart have been working together as a duo in the last few years, and their 2018 digital self-release of Houben’s ‘Duos' was highly acclaimed. They also performed together on Frey's 2017 album Ephemeral Constructions (Edition Wandelweiser).