Two years ago today, a local newspaper in Matsumoto City, Nagano (my father’s hometown) featured a retrospective article on my late father, who was once a painter and art teacher and later became a designer. It was a very nice article, written by Nagaaki Ootake, art scholar and Director of Administration Office of Matsumoto-jo Castle.

My father has led a rather unfortunate life career-wise when he was young. The first misfortune happened when he won the first prize at the International Drawing Competition held in France when he was a college student, and awarded one million yen in the 1940's. But his intermediate agent, who was supposed to deliver the award to him, took all the money and disappeared. My father did not know what had happened for months, waiting for the contact from the agent until he realized the shocking fact later.

Another misfortune happened when my father’s former art student came to our house one day to desperately ask his creative advice. The student spent some time at our house, and eventually stole my father’s work-in-progress design from his desk and submitted it as his own graphic design to his boss at one of the largest ad agencies. The design became a big hit, the young designer became famous, but my father did not receive any credit. Similar things happened several times after that, like his long-time client (one of the most famous, long-established green tea companies in Japan) was stolen by the same major ad agency (they still use the same logo and package designs that my father originally designed, with no credit or copyright for him), but my father had never claimed his deserved credit or tried to make lawsuits. He was a reserved, quiet person and did not like causing any fuss in public, so he just held all the anger and disappointment inside, and kept silent. I never saw or heard him yelling or crying over those incidents. When something like that happened, he just sat at his work desk and kept silent in contemplation. When I was a kid, I could not understand why he did not try to take actions against those ill-willed people who took advantage of him. They knew that my father was not a kind of person who would make a fuss about it. I was furious about the injustice when I was a kid. But I kind of understand now - my father wanted to lead a peaceful life, holding onto his pride even if it was not publicly rewarded, swallowing all the sorrow and angers of being betrayed by his friends and acquaintances, and perhaps he still wanted to keep an inner peace and lived an innocent life, staying away from worldly impurity as far as possible. Also, on the other hand, not every design work of his was uncredited. Some of the store layout of a large shopping mall in the Kichijoji station, the graphic illustrations in a major publisher's elementary to high school textbooks (chemistry, mathematics, domestic science, etc.), they credited my father’s name as a designer. I learned how to cut vegetables or how to proceed a chemistry experiment by looking at my father’s precise illustrations, and hang out at some stores in the shopping mall which he designed. His artworks were not radical or cutting-edge, rather conservative and old-school, but the lines he had drawn were different from any other designers in school textbooks. While most designers used just one or two kinds of thick line to outline an object, my father used a variety of thickness of lines from a very thin line to a very thick line, which gave more realistic feel of dimensions and perspective to the object on paper. The extremely thin, delicate line was his signature, so it was always easy for me to distinguish his illustrations from others when I opened my new school textbooks.

Still now, when I visit Japan once in a while, sometime I come across some of my father’s design works in public places; in a wrapping paper of a major department store, in a logo and packages of the green tea company, in a logo of a newspaper .... My father’s name may not be credited to many of them, but when I see them, I feel proud and happy rather than feeling mad at those who stole the designs from him in the past. The fact that his designs have been widely appreciated and have survived over many generations means more than anything, and even though no one may know his name as the original designer of those logos and packages, his works remain here and now, and that is perhaps the greatest thing.

Since I remember my father as having such unfortunate luck in his design career, it was a great pleasure and a big surprise when I received a copy of this local newspaper article about him two years ago. It was a story about my father when he was still young, perhaps when he was holding onto an innocent belief for the future, and knowing that he had such optimistic days in his youth far before I was born was a sort of relief to me.

When I woke up this morning, somehow this article popped up in my mind, and when I looked at it again, I realized that the issued date was today from two years ago. I thought that is an interesting coincidence, so I translated the article to English and posted it here. 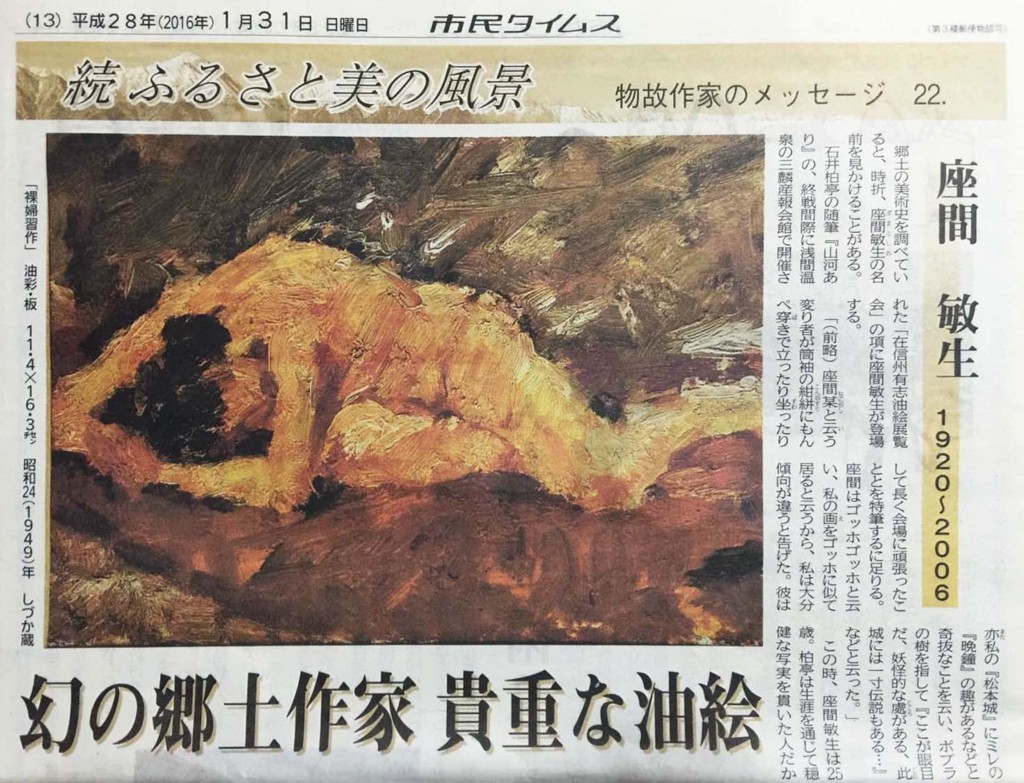 (from an article by Nagaaki Ootake on Matsumoto Citizen Times, January 31, 2016)

When I look into the local history of art, sometimes I come across the artist's name Toshio Zama.

Toshio Zama's name appears in Hakutei Ishii's essay 'Sanga Ari' (Yet Mountains and Rivers Remain), in the chapter of Shinshu Local Artists Exhibition which was held at the Sanrin Sanpo Hall in Asama Hot Spring just before the end of World War II.

"(…) It is worth specially mentioning that a peculiar fellow named Zama, wearing a dark blue tight-sleeved short coat with white splash patterns and work pants, was lingering around the exhibition room for a very long time, standing up and sitting down in front of paintings. Zama kept mentioning Van Gogh's name, commenting that my paintings reminded him of Van Gogh's works, so I told him that I think my style is quite different from Van Gogh's. He also said a bizarre thing like that my painting of 'Matsumoto-jo Castle' had a similar flavor of Millet's 'The Angelus'. He pointed to a poplar tree in the painting and said, "Here is the primary object, which is a bit ghastly. In fact, this castle has a mysterious folklore …"

Toshio Zama was 25 years old at that time. Since Hakutei had adhered to moderate realism throughout his life, his style was quite different from that of expressionism painters like Van Gogh, but it is a pleasant episode that shows Toshio Zama's passion to pursue the new trend in his youth.

Although I have these small fragmented details on the painter, I could not gather enough data to get the full picture of him, and Toshio Zama had long been a phantom local artist to me.

In the autumn of 2013, our 30 year old house began to have problems and our lighting fixtures broke down, so we needed to replace them with new lighting fixtures, but did not know anyone in that business. When I was at a loss, my coworker told me that he had a friend who worked at an electronics shop, so I asked the electrician to come to our house. The electrician saw a huge amount of art-related books and materials stacked in our house, and told me that he knew a person whose uncle was a painter who had worked as a designer in Tokyo and also had taught Yayoi Kusama art a long time ago when she was very young. Surprisingly, that person was Toshio Zama. A clue to know about this artist, which I had been looking for a long time but could not get any hint, was suddenly presented to me with a mere coincidence. Through the electrician, I was able to get in touch with Toshio Zama's relatives who gave me a profile of the artist.

Zama's first name Toshio (敏生) was originally Toshio (敏夫) in Kanji character, but he used Toshio (敏生) as a painter/designer. He studied oil painting and sculpture at the Tokyo Fine Arts School (now the Tokyo University of Arts), and came back to his hometown to become an art teacher at the Matsusho Gakuen High School. Around the same time, perhaps after hearing that there was a new art teacher who graduated from an art college (which was rare in a countryside town then), Yayoi Kusama came to visit Zama to take private lessons to learn art. It was when Kusama was still in the Matsumoto Girls' High School (current Matsumoto Arigasaki High School), somewhere between 12 - 16 years old. Zama started to exhibit his paintings at the second All Shinshu Art Exhibition in 1946 until the third Nagano Exhibition in 1950, and quit his art teacher job in 1951 to move to Tokyo.

In Tokyo, he placed himself in the field of commercial design; he first worked at the Semba Corporation as a designer, and became a freelance designer around 1960. He co-authored a book 'Commercial Design - How To Conceive and Create Store Design' which became a must-read guidebook for commercial design beyond generations. The logo design of the sport newspaper Daily Sports was also a work by Toshio Zama.

It was difficult for me to find the oil paintings of Zama, but I found one small piece at Shizuka, an old Japanese-style pub (izakaya) run by the same family for generations. Shizuka has been a place where local artists and cultural figures hang out from old times, with the owners' family members who have also been art lovers, so that must be why this painting was kept by them until today. Since then, I received news from Zama's family who found another painting of his, which I posted here. These paintings seem to indicate his solid attitude as a painter who graduated from an art college. 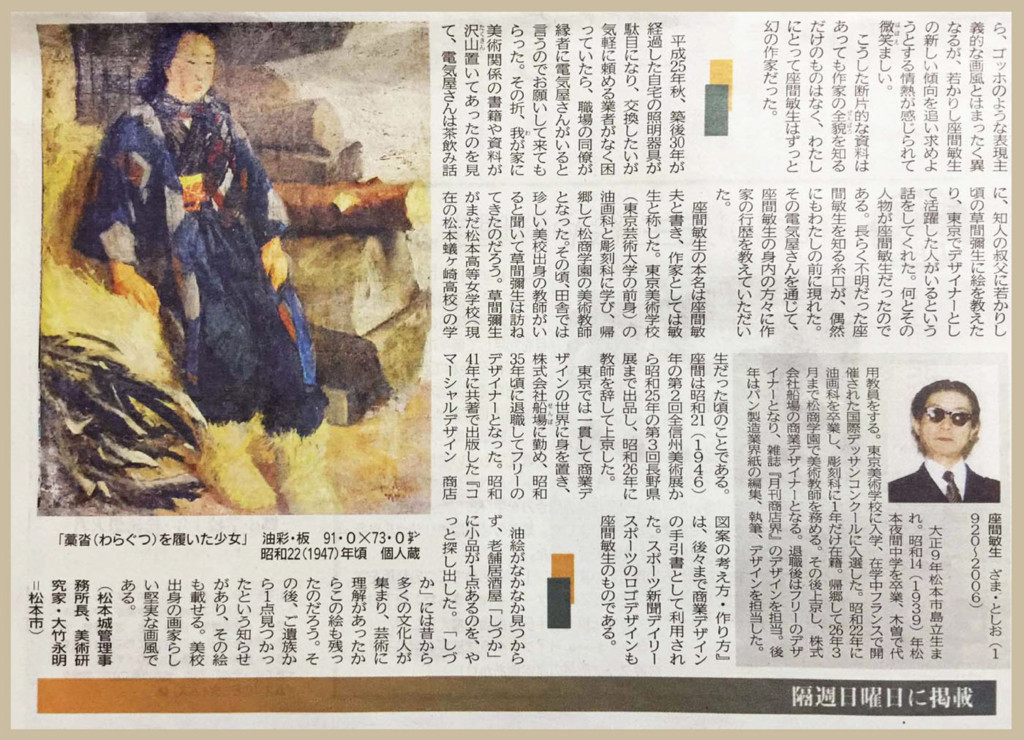