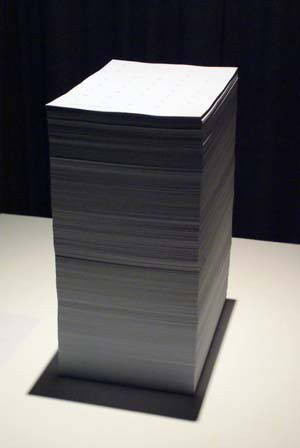 Manfred Werder shows that music exists all around us in our natural environment, and leads the listener to experience this via performers’ realizations of his scores. The music Werder presents has the least involvement of the performer’s individuality of any of the Wandelweiser composers, allowing the natural state of a place to remain as intact as possible. Werder wrote to me, “The music I love most occurs when it happens that, in a moment of confidence I sit somewhere indoors or outdoors and don’t do anything at all. The world and its music unfolds differently in such a moment, and all worries for purposeful content seem so vain, actually destroy this natural and immediate relation to the world.”

In Werder’s scores, both the immensity and the minimal nature of his concepts can be overwhelming. The immensity is illustrated in his compositions ein(e) ausführende(r) seiten 1-4000 and stück 1998, two epic projects Werder started in the late 90’s. In ein(e) ausführende(r) seiten 1-4000, the performer is instructed to play one action in each time unit of 12 seconds, over several pages from what will eventually be a 4000 page score. The whole piece will in the end result in having 160,000 actions in total, over a duration of 533 hours and 20 minutes. This activity is taken up by different performers at different times in different places – each one picking up where the previous one left off. In contrast, the minimal character of his more recent work can be seen in his composition 2005¹ and other similar subsequent projects, in which only one or a few sentences or words are noted in the score, with the duration and the number of performers indeterminate. 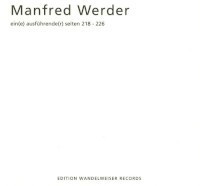 ein(e) ausführende(r) seiten 218 – 226 was released by Edition Wandelweiser in 2006, with a realization by Antoine Beuger. The 72 minute recording, which is a small part of Werder’s 533 hours and 20 minutes epic piece ein(e) ausführende(r) seiten 1-4000, consists of very quiet single electronic sounds, one at a time, punctuated by short silences. In this piece, the performer is instructed to play one action consisting of six seconds of sound, followed by six seconds of silence. The sound is instructed to be ‘to itself, clear and objective, simple’.

Antoine Beuger’s minimal electronic sound, evoking in me a chirp of a small cricket on a quiet autumn night, contains an absolute purity that seems to reject any kind of excessive noise and discord or human attachment, seemingly purifying the air to create a peaceful, harmonious world. While sustaining this absolute purity, Beuger’s sound never contains obstinacy or insistence, and instead, it contains a humility and flexibility that perfectly integrates with nature. Everything in this room – a low, almost inaudible continuous noise from my CD player, various sounds jumping outside of the window, silences between sounds, and the movement of my mind – are gradually drawn toward the humble gravity of Beuger’s quiet electronic sound that exists in the room as a core.

Even when the sound is alternated with silence, there is no feel of suspension. In the silences of this piece, the music is still moving forward. The various textures of the silences gradually unfold, with each of Beuger’s sounds acting as an agent, extracting something out of the subsequent silence – something hidden but normally not perceived. The substantial textures of these silences seem to be as important elements to this composition as the sounds. With Beuger’s electronic sound as the axis, the discretely scattered environmental sounds are now all connected as one to equally become essential parts of the world of Werder’s music. The tranquil, profound and introspective world of the piece seems to indicate some sort of enlightenment that all the phenomena in this universe are connected in some way, directing the listener’s mind toward the infinite external world. After listening to this 72 minutes, the listener may think of the hypothetical music that might make up the rest of the 533 hours and 20 minutes, experiencing the tremendous immensity of Werder’s world.

In this piece, the performer restrains his individuality as much as possible, assimilating his sounds into the naturalness of the environment as best he/she can. The minimal involvement of the performer becomes even more extreme in Werder’s later work 2005¹, in which the performer ideally becomes completely transparent. 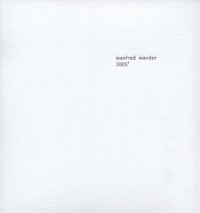 2005¹ was realized by Swiss-based composer/performer Jason Kahn and was released from Winds Measure Recordings in 2012. This set of eight CDRs contains 31 tracks, each an 18 minute unedited recording of the ambient sounds of the Zürich central railway station, recorded by Kahn. The recordings were made every morning at 10 AM for a month from March 1-31, 2010. The score of the piece has only three lines of words: place, time, (sounds). In fact, this piece was composed by the minimal conditions of place, time and sounds.

Every place has its own unique vibration. It may not be recognized easily by our ears or other senses, but it is always there regardless of the flow of time, sending out the particular vibration to the air like a human heart. If you are standing or sitting in a place for long hours, you may be able to sense the rhythm of the vibration of the place, as if you found a slight hint of distant sounds from an underground water vein. If you do so, you are now connected to the core of the place.

In the train station where this recording was made, time passes by. And as it does, various phenomena happen there, appearing and disappearing while leaving some small traces behind. Voices and footsteps of various passengers approach and recede, trains arrive and leave, and as they do, the ambient sounds change slightly and gradually. The only thing that remains fully intact is the core (heart) of the place. When I was listening to the ambient sounds of the recordings on the 8 CDRs, I started to feel as if I myself became the Zürich central railway station – or as if I happened to get into the heart of the station. As I feel I became the core of the station, the passage of time and the sounds happening there began to feel more crisp and sharp.

Near the end of the second CDR, I found myself starting to listen to the ambient sounds of the railway station as a kind of music. This is music that was born from casual meetings of the sounds of various passengers and trains and all the phenomena occurring at the same place at the same time, transiently and incidentally creating a mixture of sounds with various pitches (heavy bass tone, bass tone, midrange tone, high-pitch tone, etc.) and various volumes, intertwining with the vibration of the core (heart) of the place. This co-performance of all the ambient sounds gains a vital energy as one entity with a certain rhythm. Each form of music from each morning of the 31 days may sound quite similar to the others, but each track is slightly different if you listen to it carefully.

What attracted me were the unexpectedness and the freshness of the development of the sounds and the subtle changes of the flow, completely free from any human guidance. This music was born from pure contingency, without any mediation from the performers. The performers of the music here were passengers’ footsteps and voices, distant machinery, noises of trains, and so on. Without them knowing, this fascinating music was made, morning after morning. Once I realized the presence of the music in the ambient sound here, I was confronted with the simple fact that the world is full of music with intact sounds.

Something else that struck me while listening to Kahn’s realization was the relation between sounds and silences. Between tracks (each of which lasts exactly 18 minutes) is a short silence cut in rather abruptly. Normally, the silence is considered to be a canvas and the sound is considered to be a subject painted on the canvas, if music is compared to painting. However, after my ears were immersed in the world of the ambient sounds on the recordings for many hours and became completely accustomed to it, this relation started to feel inverted. After listening to 3 or 4 discs, the ambient sounds of the Zürich central railway station started to feel somewhat transparent and naturally existing like the air around me, and the short silence after each track started to feel like an unexpected incident or a subject, like hearing a loud sound. The experience of the inversion of sound and silence was shocking – the ambient sounds of the station I heard initially as the ‘sound’ became the canvas, and the silence I heard initially as a pause between tracks became the subject that vibrated the air around me. In a way, Jason Kahn was performing the silences in this piece.

In field recordings, sometimes the performer’s mediation (or intention or control) gives sounds more meanings or colors than the original sounds innately possess. In this way, the presented sound often becomes the performer’s ‘voice’ or his/her tool of self-expression. However, if the recorded sound can remain free from human mediation as much as possible, it can keep its original nature close to intact and the natural musical flow of the environment can be preserved. In Manfred Werder’s 2005¹, the only part that reflects the performer (recorder)’s aesthetics or individuality is the framing: how to choose the place to record, when to record, how long the duration should be, and how to arrange the recordings on the CD, while keeping Werder’s score (consisting of particular words or poetry) in his/her mind. Meanwhile, in terms of the content or the development of the field recordings, the recorder’s intention or manipulation is not involved at all. Here, the recorder’s role is just to prepare the frame under the influence of Werder’s words on the score, and the music happening in the frame is an ensemble of the casual sounds born from the world with pure contingency. In a way, the ‘place’ plays the music itself, independent from anyone’s intention, within the frame prepared by the recorder (performer).

This recording of Manfred Werder’s piece showed me that the ambient sounds of a daily event could be heard as music – music genuinely composed with incidental elements without the performer’s intention, by being cut out from the world and put in a frame. In Werder’s music, the composer himself is silent, via the lack of explicit instructions in the scores, which are like open fields where performers can realize the work with a free spirit without precise restrictions. When I imagine that this same score could be realized by various artists in various places in the world, as various different recordings of ambient sounds, which could be heard as various forms of music, and that this ultimate minimal score with only three lines of words has a possibility of inspiring an innumerable number of works of music, I am overwhelmed with the vastness of the tremendous scale of Werder’s world. 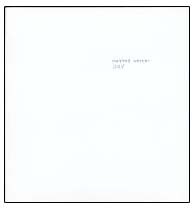