Dissolve the borders between the outer world and the inner world with the equality of sound, silence, performer, environment and listener 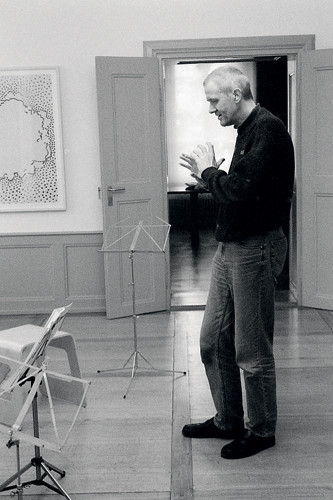 In order to understand and appreciate Antoine Beuger’s compositions, I strongly recommend you to experience live concerts if possible. One memorable one for me was in 2010, when Ben Owen and Barry Chabala played Beuger’s un lieu pour être deux, and Dominic Lash played calme étendue in a small room of a church in the East Village of Manhattan. I would like to quote a part of my review I wrote afterwards, since it seems to connect with how Beuger’s compositions in general make me feel.

The silence of the performer and his instrument seemed to be the core of the space in this piece. They were like a center which united all the environmental sounds heard in the room with transparent threads to the invisible music, so the rustle of trees, cars passing by, chirps of birds, and stomping noises of people upstairs started to feel like parts of the music which was developing silently. Despite there being no actual performed sounds at this point, there was a tight sense of unity over the whole situation – the performer and the instrument which remained still, the environmental sounds randomly coming from outside, the silent audience listening to the whole situation carefully – with all of them sharing the same time and space.

Dominic Lash’s silence did not cause a cooped-up feeling to reject the environmental sounds at all. Instead, it had an openness to accept all the other noises heard in the room, like breathing the air. The naturalness of his silence made me feel that the performer and the audience equally exist here, just like the wind and trees, rivers and oceans equally exist on earth.” (August 12, 2010)

Antoine Beuger’s compositions seem to welcome any possibility. It is not just music that is created by the sounds of the instruments performed from the score, but also music that accepts all the accidental sounds (and noises) happening in a situation equally. If it is performed in an extremely silent room where the environmental noises are hardly heard, or if it is performed in a room where various environmental noises are jumping in, or if the volumes and the natures of outside noises are different, the same composition may give the audience completely different impressions. By accepting these various elements of eventuality, Beuger seems to show that one single composition could contain infinite possibilities in the ways of experiencing the music.

The equality seems to be the key to Beuger’s music – where all the elements including the performers’ sounds, the silences, the environmental sounds, and the audience are all considered as parts of the music. The silence is as important as the sound, the environmental sounds are as important as the performers’ sounds, and the audience is as important as the performer. These elements, normally recognized as opposite subjects facing or confronting with each other (i.e. sound vs. silence, performer vs. audience) in conventional music, seem to become parallel in Beuger’s pieces to move closely together along the time. This unique signature of Beuger’s pieces can be seen in the following two CDs. 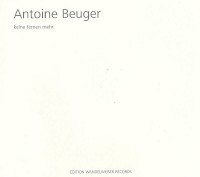 Antoine Beuger’s 2010 release keine fernen mehr is a double CD that consists solely of the sounds of whistling. In this piece, Beuger himself whistles in an extremely quiet manner to give the sounds a very fragile, fleeting, flaky texture. Between the individual whistles, there are almost inaudible faint sounds of Beuger’s breath and the room noises at a quiet white noise level. Rather than sounding like a particular pitched sound, Beuger’s whistle contains several different nuances of tones at the same time. The ambiguity of the tone of his whistles makes me feel as if I were listening to the sounds of the wind rather than human sounds. The translucency of Beuger’s whistling, that give the impression of blowing through the gray area between sound and silence, overlap with the white noise of the environmental sounds (both on the CD and in my room) and dissolve the border between the performed sounds and the environmental sounds – as well as the border between sound and silence. And at the same time, the personal nature of the whistling sounds appeals to the listener’s sense directly as if he/she was hearing the sound of his/her own mind, leading him/her to descend down to a deep, calm contemplation, and dissolves the border between the outer world (performed sounds and environmental sounds) and the listener’s inner world (contemplation). 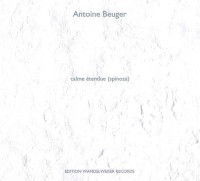 This borderless sense (or equal sense) of the outer world and the inner world is also experienced in Beuger’s 1997 composition calme étendue (spinoza). In this piece, the performer is instructed to read the text of Spinoza’s Ethics very attentively and carefully in a very relaxed tempo (one word in every eight seconds), with a very quiet voice. The performer should not try and suggest a specific meaning to the individual words or groups of words, through emphasis or intonation. Spoken sections alternate with sections of silence. In these silent sections, the performer is instructed to sit quietly, doing nothing, with calm concentration. On the CD released from Edition Wandelweiser in 2001, Beuger himself read the text from Ethics.

With this monotonic manner of reading in between complete silences, Spinoza’s words start to be heard in a very interesting way. The genuine phonetic individuality that is inherent within each word (color, brightness, texture, darkness, softness, solidness, thickness, etc.) starts to emerge without being attached to its meaning. Each word contains a slightly different tone from others, creating a slightly different shape of ripple in the silence after, which makes each silence feel differently nuanced. Just like each person has a different individuality, each word contains a different inner world. In this piece, under these extreme sparse circumstances where each word is presented in its simplest form, the world inherent in each word feels as if it has been enlarged and projected into the following silence. Here, the sounds and the silences have an equal impact over the listener. The immanence of each word projected in the silence after, which contains a slightly different tone and impression, echoes the listener’s inner world to combine to truly compose the music. This makes the whole listening experience of this piece feel intensely personal despite the sparseness and the monotone of the sounds, letting the listener experience something similar to a deep contemplation specific to themselves.

Antoine Beuger composes his music with visible tones and invisible tones, opening a path to connect the outer world (performed sounds and the silences) with the listener’s inner world to make a more unified form of music.