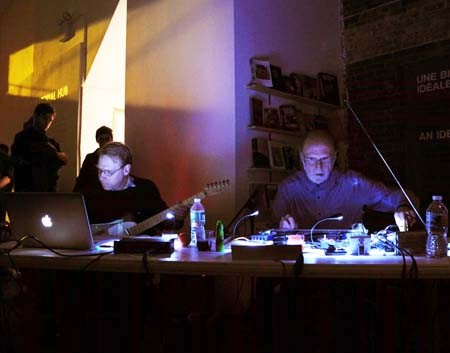 Keith Rowe and Wandelweiser composer Michael Pisaro seemed to have quite different interests and orientations judging from their previous bodies of work, but the result of the first meeting of this duo at AMPLIFY 2013 was surprisingly balanced, creating their own unique world where two different personalities and histories melded into one beautiful performance. Even though Rowe and Pisaro have been working in what seem to outsiders to be different areas, the two have many overlapping interests in common: both share the influences of Christian Wolff and John Cage, both are huge fans of classical music, both play the guitar, and both have humane nature in their sounds. Michael Pisaro has a deep respect for Keith Rowe, and Pisaro's 2012 disc 'Fields Have Ears (6)' was in part an (unspoken) tribute to Rowe. Rowe did duo work with another Wandelweiser composer, Radu Malfatti, in 2010-2011, so this set with Pisaro was his second challenge to work with a Wandelweiser composer.

This duo set with Pisaro was Rowe's idea. In a time frame agreed upon beforehand of 49 minutes, Rowe played six overlaid pages of “Treatise”, and Pisaro used pre-composed sine tones while improvising with a guitar, stones, radio and a short insert of field recordings. Rowe started with quiet hum noises and object sounds, referring to the graphic score covered with a paper with a square hole in the center. Meanwhile, Pisaro cast in some simple yet memorable sounds by tapping two stones while also inserting some radio noises and distant car sounds from field recordings. The set was quite different from the many other Rowe collaborative sets which I've seen since 2002. Although the overall impression of the set was rather peaceful and less aggressive or eventful compared with most other sets of Rowe, there were so many details going on in each moment when listening to them carefully - more microscopic events were happening in subtle layers here than in most other Rowe collaborations. Their interaction was warm, two artists with long histories who obviously respected each other and shared deep common roots were cherishing this special opportunity to have a public conversation via sound. Toward the end, Pisaro introduced soft electric guitar tones slowly in specific intervals, leading the music to a harmonious conclusion and an elegant, introspective, peaceful finish.

The intimate feel between the two reminded me of the duo set of Keith Rowe and Toshimaru Nakamura at AMPLIFY 2003: elemental at Tonic, NYC (in a silent, snowy midnight of February), when they played the most well-balanced beautiful set as a duo in a deeply focused, intense yet serene atmosphere. The warm humane nature in Pisaro's humble sounds here overlapped with Nakamura's sounds at that time, which were also rooted in Nakamura's deep understanding and respect for Rowe's music. I have not found that peaceful well-balanced air in Rowe's performances in recent years until this set. It was distinctively different from Rowe's solo performance 'September' at AMPLIFY 2011 in NYC, which was far more aggressive and leaning towards his emotional blast with a dark, almost off balance extremity. The contrast between the two sets was quite interesting to me, since it showed the wide range of Rowe's performances in almost completely different directions. But in this duo with Pisaro, I felt I saw some new potential of Rowe's work, which could be more balanced in a harmonious way (even more harmonious than his duo with Nakamura in the past) while keeping Rowe's signature sharp edge. 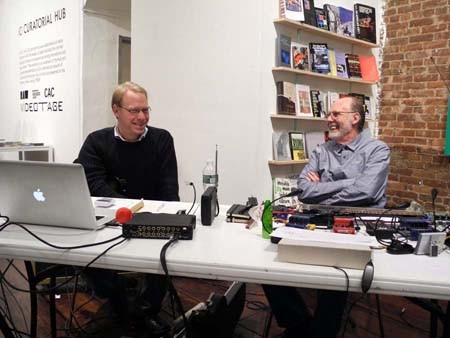