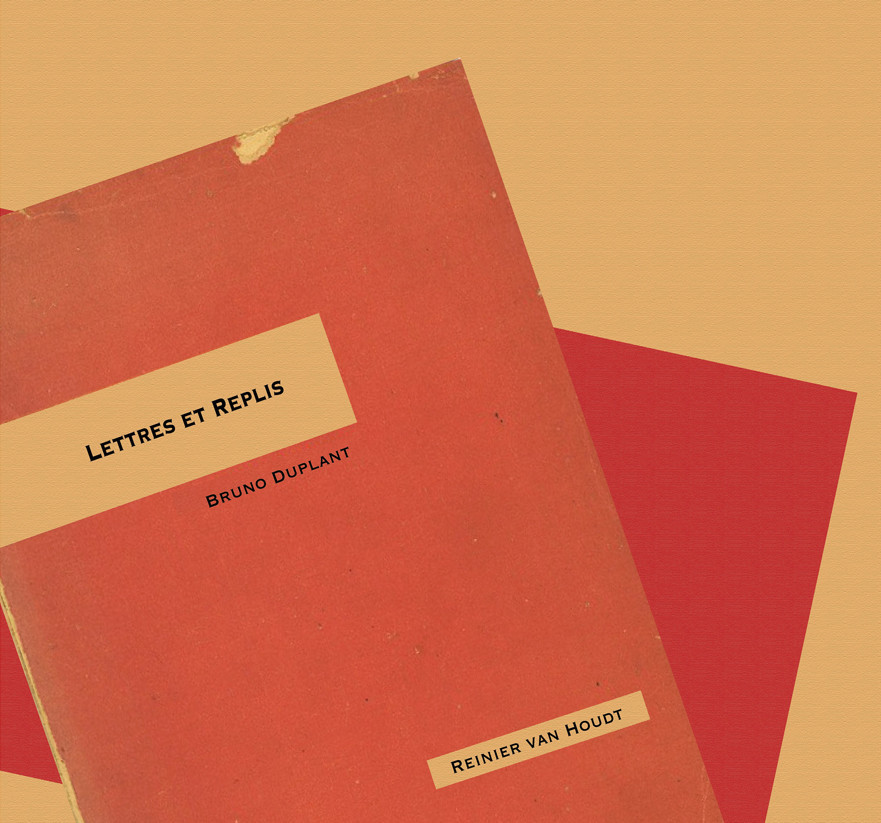 Van Houdt’s realization of these scores are like his ‘reading’ and ‘replying to' Duplant’s scores, with composing three ‘Lettre’ pieces with multi-layered recordings of his piano sounds, and three ‘Repli’ pieces with his piano recordings and his field recordings. Van Houdt’s delicately nuanced piano sound, translucent overtones and rich resonances increase nostalgic colors and melancholic shadows as the record develops.

“I composed my realizations around the fundamentals of reading and writing. The Lettres are connected to melody spelled out and read in all directions propulsed by memory and gaze. The Replis are connected to the harmonies from a place as they permeate and unravel through the metaphorical holes made by writing, linearly arranged again with recordings of a walk along the river that traverses this place. Letters cannot be erased, they affirm the materiality of language. Words (like music) are not envelopes containing clear messages, nor are they loaded guns as Sartre would have it. The possibility of meaning is rooted in the dark side of language where destruction and meaninglessness precede all possible worlds.” (Reinier van Houdt).

Reinier van Houdt started working with taperecorders, radio's, objects and various string-instruments at a young age. He studied piano at the Liszt-Akademie in Budapest & the Royal Conservatory in The Hague. He developed a fascination for matters that escape notation: sound, timing, space, physicality, memory, noise, environment - points beyond composition, interpretation and improvisation. He has built himself an unusual repertoire that consistently resulted from personal quests; from collaborations with composers & musicians, from research in archives, from the composing and staging of music-performances or from unorthodox studies of classical music.
Aside from his own music he premiered music by Robert Ashley, Alvin Curran, Kaikhosru Sorabji, Francisco López, Charlemagne Palestine, Yannis Kyriakides, Maria de Alvear, Jerry Hunt, Michael Pisaro, Walter Marchetti. He has also worked with John Cage, Alvin Lucier, Luc Ferrari, Peter Ablinger and Christian Marclay. Reinier van Houdt plays in Current 93, recently releasing an album with contributions by Nick Cave, John Zorn and Antony Hegarty. He is also one of the moving forces behind the experimental music collective MAZE.

Bruno Duplant is a prolific composer and a musician (organ, double bass, percussion, electronics, field recordings) living in the north of France. He has collaborated with many musicians around the globe and has also made solo works. His recordings have been published by various labels including Another Timbre, Ftarri, B-Boim, Diafani, Notice Recordings, Suppedaneum, Unfathomless, Dinzu Artefacts, Aussenraum, Moving Furniture, Verz, Mappa, Hemisphäreの空虚, Falt, and his own label co-curated with Pedro Chambel, Rhizome.s.
For Duplant, composing and playing music is similar to imagining, creating, and sometimes decomposing new spaces/realities, and new entities. But it is also a reflection on memory, not the historic one, but memories of things, spaces, and moments. His music is strongly inspired by the writing (Francis Ponge, Gaston Bachelard among others) and some artists/musicians (John Cage, Luc Ferrari, Eliane Radigue, Rolf Julius).

field recordings by Reinier van Houdt made on John Cage's 100th birthday on September 5, 2012 along the Maas Harbour in Rotterdam