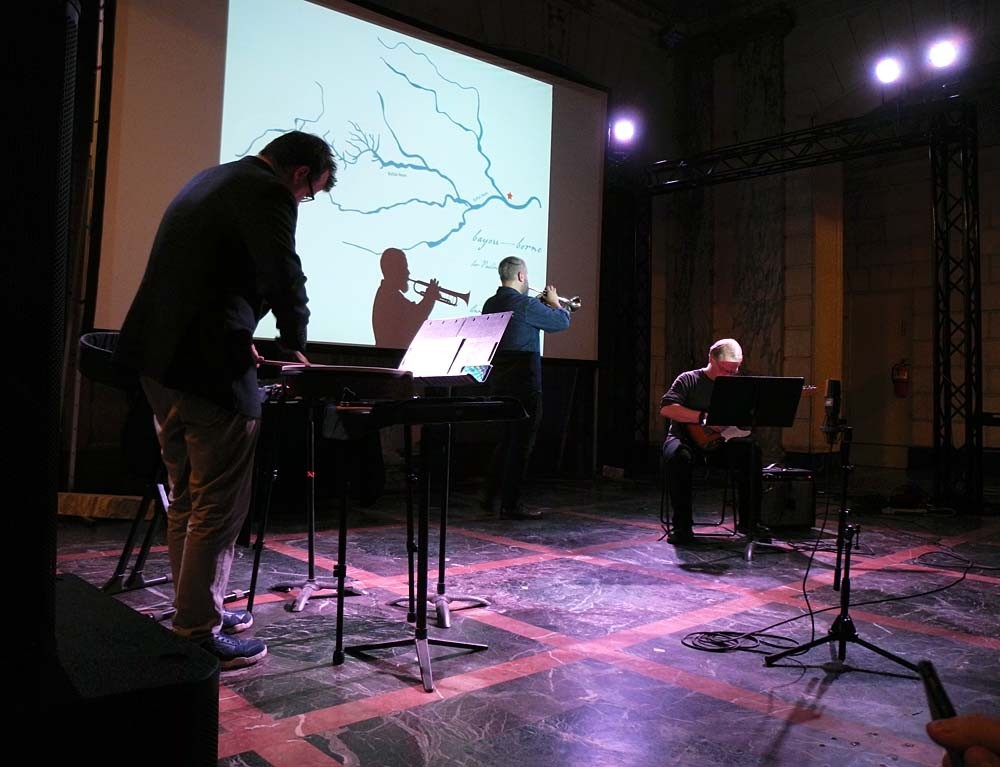 Successful interaction of composers and improvisers

The trumpeter and composer Nate Wooley organized a two-night mini-festival “FOR/WITH” at Issue Project Room in Brooklyn on September 29th and 30th, featuring four iconoclastic composers—Christian Wolff, Ashley Fure, Michael Pisaro, Annea Lockwood—each of whom have been breaking new ground in contemporary classical/experimental music scene with unconventional approaches. Wooley commissioned each of the four composers to write a piece, and two of those commissioned works (of Wolff's and Pisaro's) were performed at this event. Five performers—Nate Wooley, Ross Karre, Jessica Pavone, Megan Schubert, Kristin Norderval—played compositions and improvisation in various forms of ensemble and solo, together with the composers in some of the sets.

Wooley—as a distinguished improviser who also composes for his works—organized seven sets over the two nights featuring compositions and improvisations in various forms. The seven sets were: 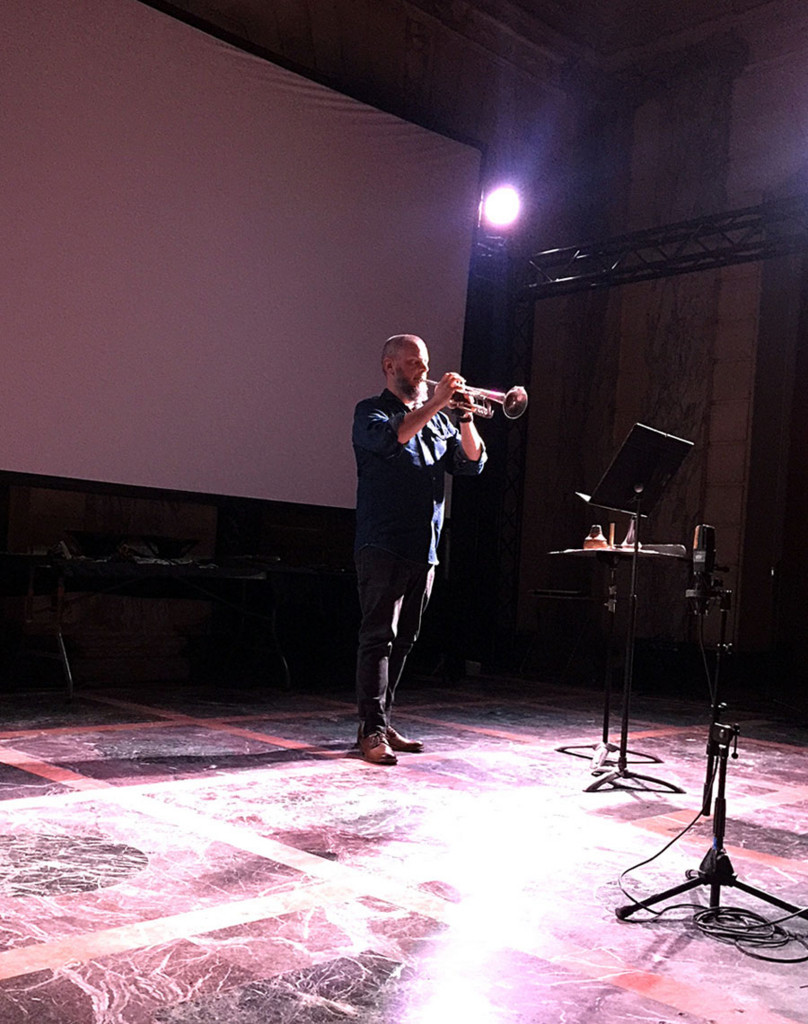 In the first set of the first day, Nate Wooley played solo trumpet on Christian Wolff's commissioned piece For Trumpet Player. This 25 minute piece has an open space for a solo performer to add free improvisation gestures within the composed structure. Wooley cut in fragments of short trumpet notes sharply from various geometric angles, with short silences in between. While the vertical complex of hard trumpet sounds delivered an intense, dry, direct impression of the composition, Wooley added soft textures to the piece as improvisational elements with his muted sounds of trumpet and his own voice, which created a sense of perspective with a realistic, immediate connection between the music and the performer with human touches. The elements of improvisation Wooley inserted in a few spots seemed to add a fresh body and character to the composition, seemingly expanding the dimensions of the music to reach a personal level of listeners' minds. 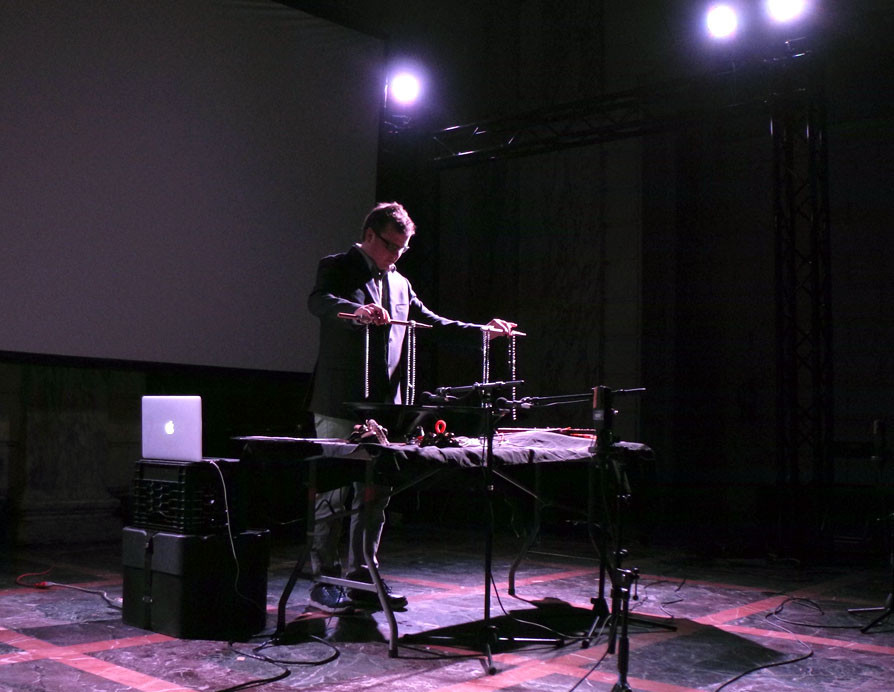 In the second set, Ross Karre performed Ashley Fure's 2016 piece Shiver Lung 2 on percussion. On the table in front of Karre on stage, there were a pair of bowl-shaped percussion instruments resembling a pair of lungs, rapidly spinning. There were also several objects and chains near the percussion instruments. Karre picked one of them (necklace-like chains first), holding it with both hands symmetrically, and slowly lowered the chains so they made contact with the thin edges of the spinning percussions. Very subtle frictional sounds came out from both sides of the speakers, or from a single speaker in turn. Karre changed objects from one to another, creating an ominous atmosphere, and gradually increasing its intensity and explosive energy toward the end.

In this piece, the performer did not make sounds by actively adding his gestures. Instead, he let the percussion instruments make sounds with his careful attention to the moment when the object touched the percussion instruments, being extremely alert to avoid excessive contact which would cause unexpected chaos, in order to place the sounds within the frame of the composition. In a way, 'listening' and ‘expecting (predicting)’ the possible outcome of the contact seemed to be the most crucial key in this performance rather than just 'performing', and this alertness and intensity of the performer seemed to heighten the tension of the music. This method, utilizing gravitational force and the different textures of objects to contact the percussion instruments, reminded me of Michael Pisaro's 'rice fall (1)' in which the sounds of rice falling on various objects created an organically composed music with extremely delicate control of the percussionist Greg Stuart, utilizing the difference of intensity in falling rice and various objects of different textures to receive the falling rice. In Fure's piece, the music contained more vigorous energy inside, gradually swelling up to the maximum loudness by the end. The way it reached a climax in the end had a similar impression as the raw, explosive energy of free group improvisation in the 60's, but this piece had more restrained, sophisticated balance and meditative calmness within a precisely structured composition. 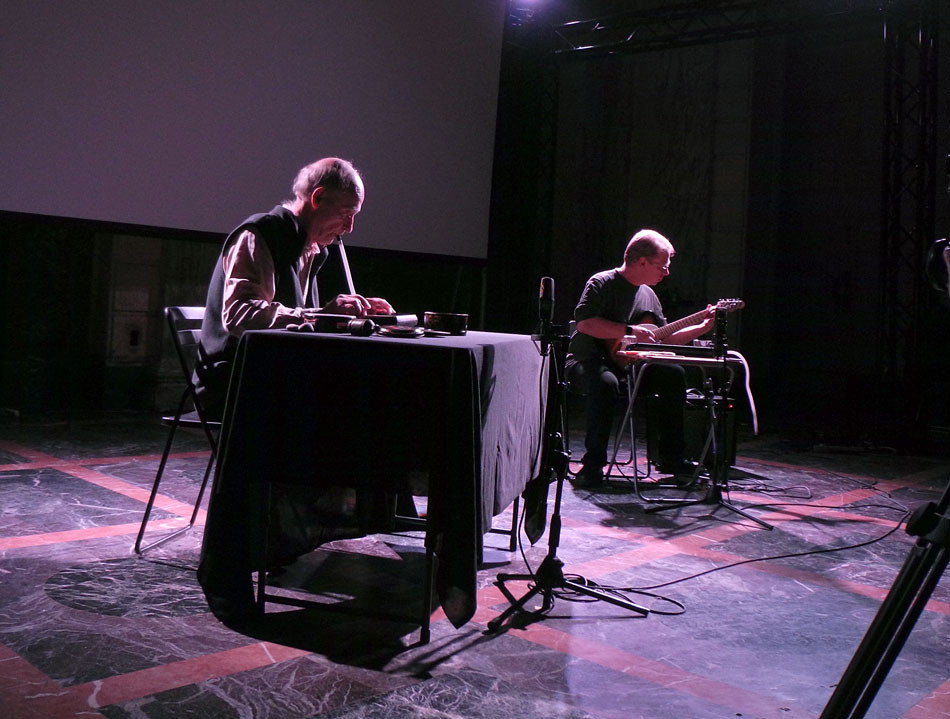 Christian Wolff and Michael Pisaro have performed improvisation as a duo on their 2016 CD 'Looking Around' (Erstwhile 080), but this was the first time for them to play as a duo at a live concert. In this set, Wolff played melodica and small percussion instruments, while Pisaro played electric guitar and melodica. Both of the two played quiet, sparse sounds in a horizontal flow with a substantial component of silence. The vertical ripples of sounds that Wolff occasionally cut in gave the flow a sharp, wide awareness. Pisaro was keenly attentive to the sounds and silences Wolff created, responding to him naturally with no forceful effort. The sounds of the two melodicas, which were closely connected to the performer's breathing, added human elements to the improvisation with their organic textures. The balance between the duo was exquisite with a perfect chemistry, making it feel like one performer was playing.

Seeing (and listening to) this duo's improvisation was very interesting. These two composers seemed to trust each other's aspirations for perfection regardless of whether it was composition or improvisation, both minds deeply rooted in the concept of ‘composition’ (which has a structure), knowing each other's philosophies for music with respect. I was not sure if either of the two was consciously trying to play 'improvisation' outside a frame of composition, but what I felt in their performance was that the duo was 'composing' something profound in a certain 'frame' (structure) with immediate, simultaneous and spontaneous approaches with keen attentions to the space and time of the 15 minutes, without suffocating a sense of openness of free improvisation. With the close interaction of two extraordinary composers' inspirations and their intensity, the duo seemed to open even another dimension in the time-space of the room, making their performance feel like 30 minutes or even longer, with a sense of connecting to somewhere infinite. 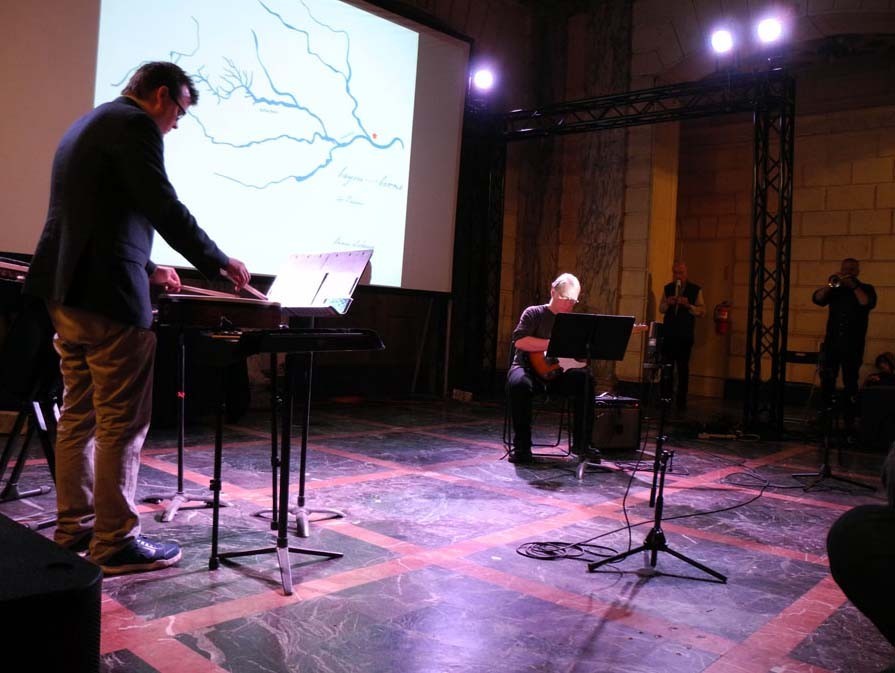 The last set of the first day was Annea Lockwood's Bayou-Borne, for Pauline (20')—dedicated to the late Pauline Oliveros (1932 - 2016)—performed by six musicians: Christian Wolff (melodica), Ross Karre (percussion), Nate Wooley (trumpet), Michael Pisaro (electric guitar), Megan Schubert (soprano voice) and Jessica Pavone (viola). The score is based on a map of the six bayous converging near Houston, Texas, and each of six musicians was assigned to play his/her instrument, keeping one of the bayous' route in his/her mind. The timing of each musician beginning to play or entering was precisely written on the score, but the last three minutes were open for free for the musicians to decide when to stop with fading out.

In this 20 minute piece, six performers played each instrument - two of them (Pisaro on guitar, Karre on percussion) on stage from the start, the other four began to walk, slowly circling around the audience in a discreet manner, playing their instruments (Schubert singing). The mixtures of the six musicians' soft sounds reverberated ethereally in the large high-ceiling room and wrapped the audience within a peaceful, serene atmosphere. Performers were listening to the each other's sounds and the reverbs in the room carefully, keeping the delicate balance between them without any particular instrument standing out. It was a great piece to be performed by taking advantage of a remarkably high ceiling of the Issue Project Room, which naturally created a phenomenal acoustic effect, evoking a solemn wind slowly ascending in a whirl toward the sky. 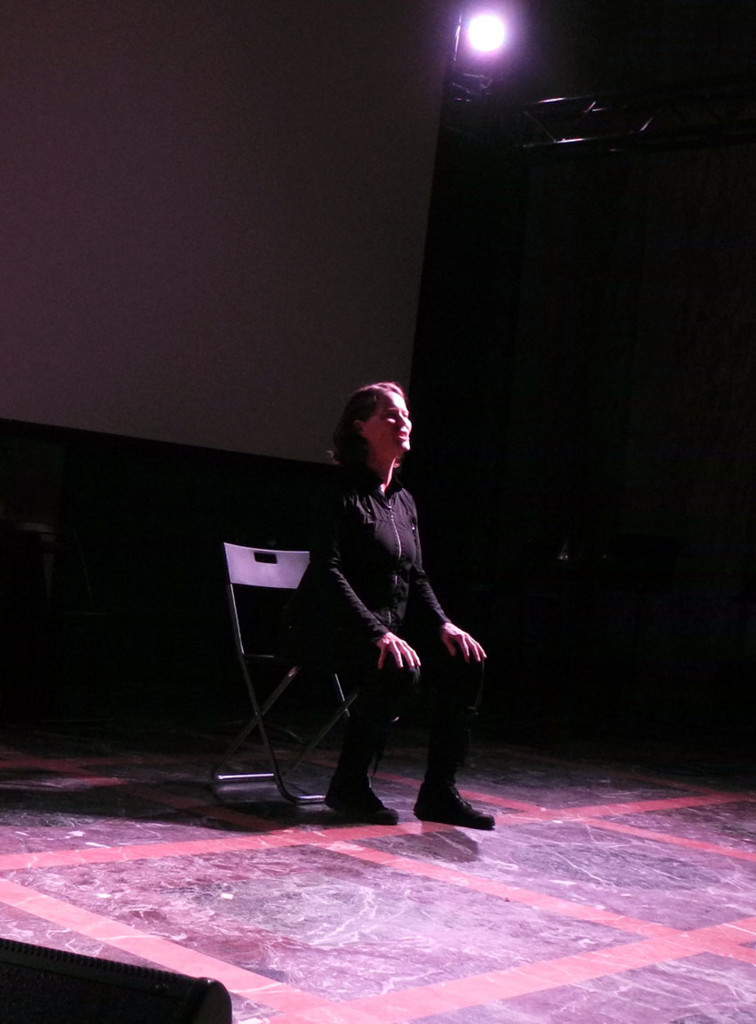 Annea Lockwood: I Give You Back – Kristin Norderval (soprano voice) (8’)

The first set of the second day opened with Annea Lockwood's eight minute piece I Give You Back, performed by Kristin Norderval (soprano voice). Norderval, whose repertoire spans from Renaissance to downtown New York avant-garde, began to sing narrative-style lyrics, acutely but softly going up and down an octave while echoing her calm but intense voice throughout the room. The lyrics of the song, stating existence of a past violence a woman had experienced before, were sung in an unemotional, matter-of-fact way (despite the lurid details), finely controlled at the absolute edge between sanity and insanity. The heart-wrenching lyrics were wrapped in the dream-like translucent, impassive tones of Norderval's soft soprano voice, paradoxically highlighting the chill of the story. 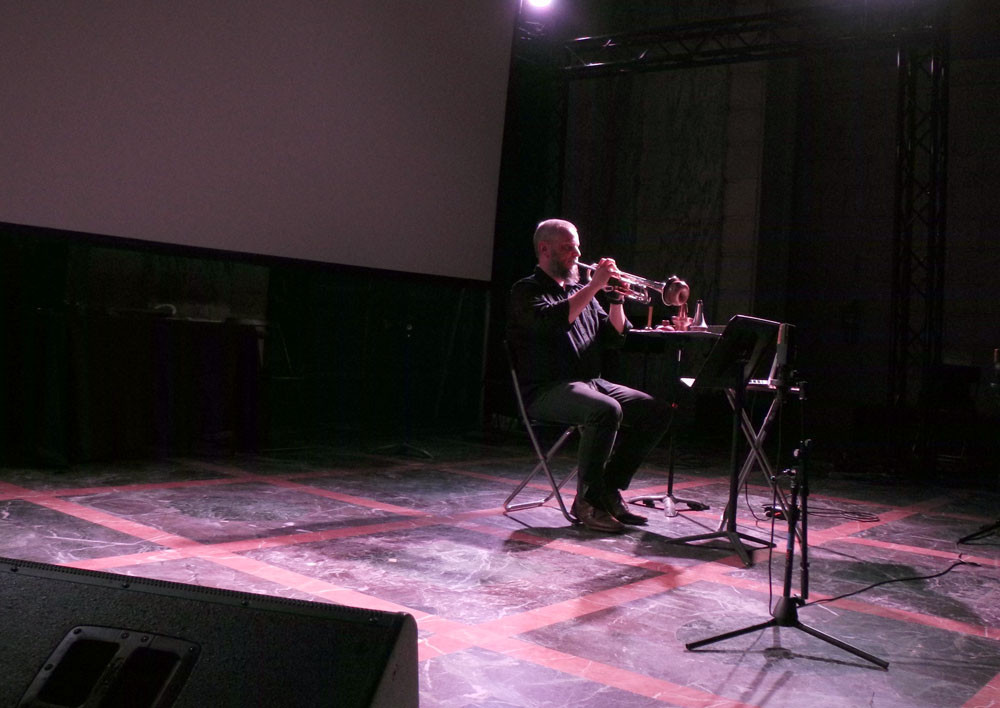 The second set of the second day was Michael Pisaro's commissioned work for trumpet and sine waves, Stem-Flower-Root, performed by Nate Wooley along with Pisaro's recordings of his sine tones. In this 30 minute piece, the sounds of trumpet and sine tones moved forward slowly sometimes in parallel, sometimes precisely with the same frequency as each other - together expanding the music in a quiet manner. Although they were basically simple linear sounds, very subtle changes of the closeness between two different sound sources increased and decreased harmonic overtone, adding roundness to the music with mysterious microtones inducing a feeling of floating.

While Wooley played his trumpet part adhering strictly to the notes written on the score, he also created a distinguished contrast against the round, glossy textures of Pisaro's sine tones, with rather thin, dry, distant sounds of trumpet. This contrast gave a unique perspective to the music: the direct, acoustic sounding of the trumpet evoked a realistic human voices emerging on the surface, while Pisaro's sine tones evoked a hidden inner voice powerfully reverberating in the heart of a human being with elastic, soft and warm textures. When the two sound sources overlapped with each other's frequency, the gap between the outer world and the inner world seemed to be bridged - just like a strong stem connecting a flower (surface) and a root (inside) of a plant. In this piece, Pisaro's sine tones were especially captivating, as if they were unfolding a spacious, profound world prevailing under the ground where the roots are supplying a vital life to the plant—like a soul of a human being. 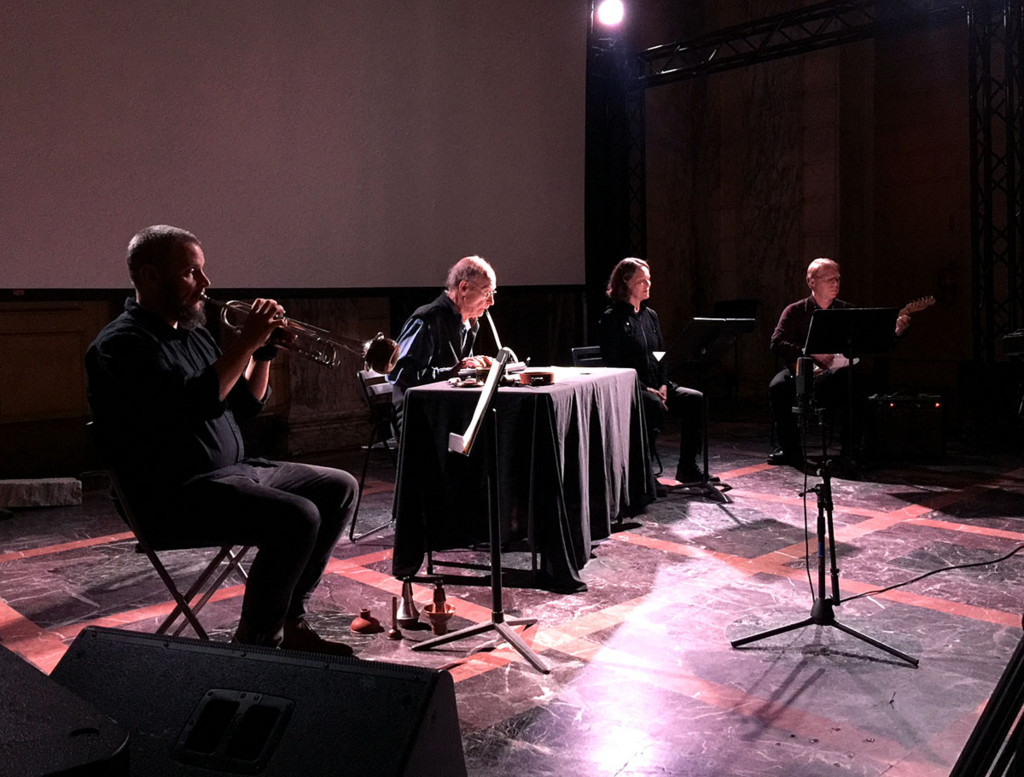 The last set of the second day was Christian Wolff's piece Exercises, featuring Nate Wooley (trumpet), Christian Wolff (small percussion and melodica), Michael Pisaro (electric guitar and melodica), and Kristin Norderval (voice). This 20 minute composition offers some freedom to the performers to play improvisation. Each performers made vertical, angular sounds with brief silences between, intertwining with each other like four different human voices intensely moving a thrilling conversation forward. In this set, the intimate and natural communication between Wolff's melodica and Pisaro's melodica was particularly memorable. 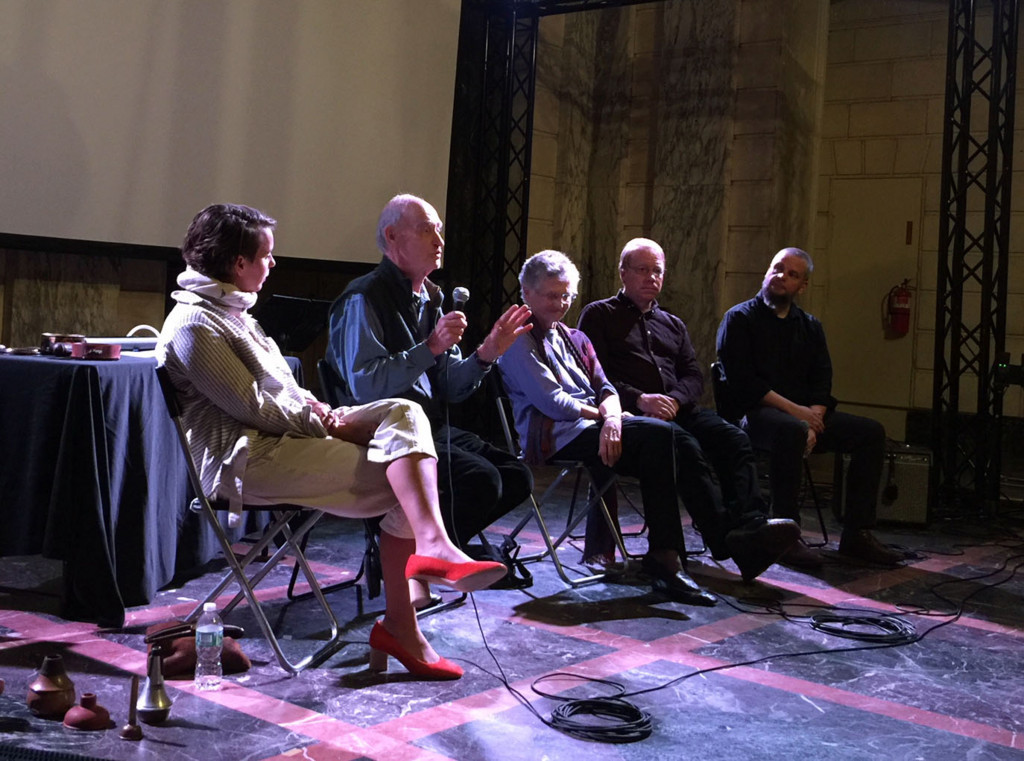 The idea of mixing composition and improvisation (or composers and performers who can also improvise) in this mini-festival showed Wooley's current interest in exploring a new ground of music—some new form of music that does not fully belong to either improvisation or composition. When an improviser performs composed music—like Wooley performing Wolff's piece and Pisaro's piece—the music seemed to obtain some notable spontaneity and immediacy which the improviser gives off naturally. All the other performers, not only Wooley, were skilled improvisers as well as classically trained performers of compositions. These performers, who have virtuosic improvising skills as well as great ears, infused new breath and vivid life into each composed music, opening a wide open space for the development of the music in an organic flow. It was a different experience from more conventional performances of contemporary classical compositions which often give me a rather rigid impression, or some of the old-style improvisation which has a total freedom for the performer but not so much structure in music. On the other hand, these approaches taken at this mini-festival were refreshing: improvisers played compositions with a free open frame of mind as improviser, while composers played improvisations with comprehensive knowledge and experiences in composing music with structures (frames) in mind, with the same intensity and a care for details they put into compositions. These approaches that Wooley and the composers/performers tried to embody in various combinations in this two-day festival seemed to be a successful presentation of how the elements of composition and improvisation can interact thrillingly with each other in a state of harmony.