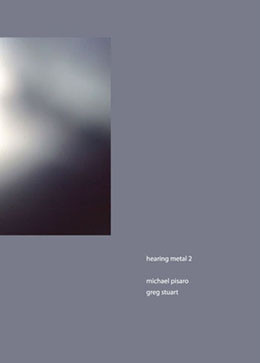 Hearing Metal 2 is a continuous 62-minute piece, consisting of three parts. Part 1 begins with calm nature sounds - field recordings of water (rivers, waves) and birds chirping, softly fading in and out in between humble silences like ephemeral scenes in someone's dream. The various sounds of water featuring in this section (surging waves, streams of river) are so memorable - these sounds immediately captivated my ears with crystal-clear, transparent textures, without conveying any hint of heaviness or pressure of the real water. Occasionally inserted quiet sine tones, organ samples, string instrument sounds and whistle-like pure high tones create a surreal feel, like fleeting shadows in the middle of sun-lit nature scenes. These instrumental sounds intertwine with the lively, realistic feel of the field recordings, tingeing the nature sounds with an air of alertness and mysticism. In this part-real, part-unreal translucent soundscape, something begins to feel subtly and slightly 'off', as if I had a glimpse of the almost invisible (but surely existing) abyss or gap in between the peaceful nature scenes. The part 1 ends with the clear chirps of a bird, whose voice sounds like a prophet to hint an entrance to another world.

In part 2, this 'slightly unreal' feel (or the glimpse of the abyss) of part 1 becomes the focus, created by the thick layers of Greg Stuart's metallic percussion sounds, and revealing the hidden, massive power underneath the reality of the sun-lit nature scenes. It is a dark world that slowly revolves with the creaking wheels simultaneously with (and behind) the bright nature scenes presented in part 1, while filling the music with a foreboding but somewhat serene atmosphere. These dark wheels feel like the shadow of nature (or the underside of the real world), giving another dimension to the reality. It seems that two worlds of light and dark gravitate toward each other from the extreme opposites, while keeping the perfect harmony without polarizing the whole world in two.

The deepest core of the world is revealed with the thick complex of Stuart's metal percussion sounds, drawing the listener's brain into a deep, awe-inspiring consciousness. The earlier solemn organ sampling (played by Pisaro's son John) in part 1 now felt like a sign to hint at the connection between part 1 and part 2 - the sun-lit bright world and the dark underground world.

This feel of two different worlds (light and dark) moving forward simultaneously evokes in me some of Haruki Murakami's novel worlds, specifically 'Hard-boiled Wonderland and the End of the World'. 38 minutes into part 2, the thick complex of metallic sounds of percussion started to sound like solemn, calm music (perhaps in my ears - though there is no actual melody or harmony recognized clearly), just like birds in nature sometimes start to sound like music when you are deeply immersed in the tableau. Soon after I started to feel I was hearing this calm music in the layers of intense percussion, part 2 ended -- as if its purpose had been fulfilled in that moment.

Part 3 started with the chirps of birds and the sound of winds - now bright nature is back again. While listening to the peaceful sounds of birds in the field recordings, my ears were still hearing the deep echoes of thick layers of metallic sounds simultaneously, as if the two worlds represented by part 1 and part 2 (light and dark) revealed their shapes in front of me at the same time. After these two worlds synchronized together in the part 3 (in my brain) in a few minutes, the music ends.

The concept of two opposite worlds (light and dark) simultaneously existing reminds me of the surreal feel of Pisaro's late 2009 piece 'asleep, street, pipes, tones', in which it felt as if several above-ground real world locations (New York streets, small towns in Europe or elsewhere) and perhaps even some unreal places were all connected through an invisible (or imaginary) network of underground pipes. Also in Pisaro's early 2009 piece 'July Mountain', two different worlds - field recordings (the sun-lit world) and Greg Stuart's percussion sounds (the dark shadow world) - were moving forward simultaneously while intertwining with each other to form one whole entity, never violating or crushing the other end of the extreme at all. This concept of two opposite worlds consisted of completely different materials (e.g., nature and metallic instruments) co-existing and creating a perfect balance and harmony seems to be one of Pisaro's significant achievements in his recent works. This sense of separation and unity co-existing in parallel is created in Hearing Metal 2 as well - in a more epiphanic way affecting the listener's subconsciousness. Hearing Metal 2 contains a similar concept as the aforementioned two pieces, but in a further developed, focused, more powerful form operating at a deeper level.